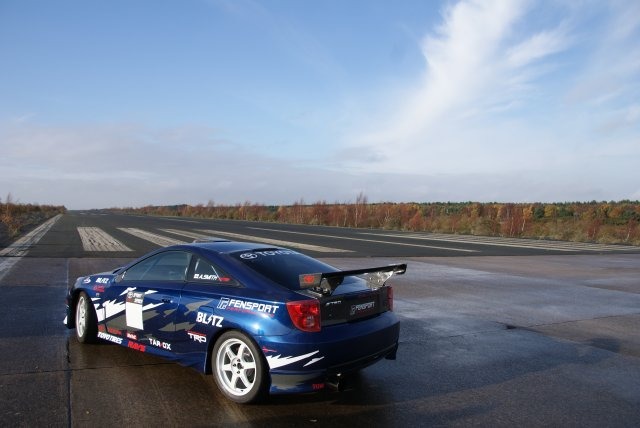 Fensport, one of Co-ordSport’s dealers, a Toyota specialist, based in Cambridgeshire, has set an astonishing top speed of 202.22 mph Toyota Celica GT4-X at Woodbridge airfield near Ipswich.

Driven by Adrian Smith, the 700 horsepower Celica modified by Fensport, recorded 196.9mph on its 1st run complete with rear spoiler; this was an exploratory run to check braking distances. Everything checked out fine and it was now time to try for top speed.

Run 2, without the rear spoiler, was aborted at 199mph due to a crosswind catching the car and making the rear end unstable.

Run 3, in the words of Adrian, “The run started fine, I got wheel spin on the slippery start in the first 3 gears, but once in to 4th the car settled nicely, then at around 180mph a crosswind again started to move the car off line, however I kept my foot in and thankfully the car stayed straight and the wind subdued. I checked the speed and it was 201, then 202, I was thinking yes its going to do 205/206 but then a tiny misfire and the speed dropped to 201 again. By then it was time to brake!! I had done it 202.22mph what an amazing feeling” The misfire was later found to be the 8,300 rpm rev limit.

The Celica is now the second Fensport car to break the 200mph barrier; the feat was even more impressive as the speed was reached from a standing start in just 1.1 miles.

More photos can be seen in our Photo Gallery.