The drivers cycled throughout the evening and with a brief period falling two laps down, they managed to bring the car back up to the lead lap in the last hour with the improving track conditions following a grueling night of cold and rainy weather.

Michael Christensen,  Porsche Works Driver , took the wheel for the final stint, taking them from third to first place.

Holding the position through restarts and several caution periods, the Porsche 911 GT3R crossed the finish line .293 seconds ahead of the second place #29 Audi R8 of Land-Motorsport for the GTD class victory.

“It was just unbelievable for us,” said Carlos de Quesada. “We had the right team, the right drivers, the right equipment.”

Larry Hahn, Alegra Motorsports’ race engineer with an extensive background including Tom Milner’s PTG BMW factory team, has won the 24hr at Daytona four times now in his class. First in 1987, 1997, 2007, and now in 2017. In all four of his class wins he used PFC Brakes; rounding up to 40 years of trusting PFC.

“We contacted PFC when we first got the new 991 GT3 R, and they gave us a set up sheet and brake balance guide.  We had zero performance braking issues this whole race,” said Hahn. “It was one of the biggest factors that led the team to this win.”

PFC Brakes is proud to be part of the Alegra Motorsports team, and congratulates them on a nostalgic and well-deserved GTD Class Victory at the 55th Rolex 24 at Daytona.

In the BMW Endurance Challenge at Daytona, a complete sweep by Porche Cayman GT4’s claimed the top four finishing spots in the Grand Sport Class of the IMSA Contintental Tire SportsCar Challenge. The four hour long race had a wide variety of fast running Mustangs and McLaren GT4’s, but was dominated by Porsche GT4 teams.  Finishing first was the No. 12 Bodymotion Porsche, second place No. 33 CJ Wilson Racing Porsche, third place the No. 35 CJ Wilson Porsche, and fourth place the No. 28 RS1 Porsche. Each of these powerhouses were fully equipped with PFC’s ZR6 and ZR69 ZeroDrag™ calipers, and V3 ZeroFailures™ discs. 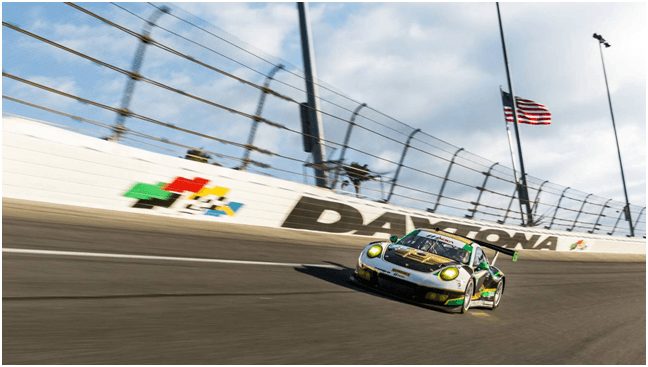