After winning the first of the days two races at Snetterton, Smiley started the second of the races eight points ahead of Smith who was mathematically his only contender for the title. In spite of Smiths best efforts, it was Smiley who just edged it to secure the 2022 TCR UK Championship title

Kent claimed victory in the second of the day’s races. Weather conditions including flash storms, sunshine and heavy rain meant that it was going to be an even more challenging day.

Despite the previous 13 rounds, it came down to the final two races to decide this year’s winner. Snetterton was to become a boiling pot.

At the start of the day, Smith and Smiley were tied on 315 points. Shepherd the next closest on 289. All eyes truly on the two main men with the highest likelihood of claiming the title. That being said, the table showed that joining those three were Winfield, Kent, Ley and Constable. All in with a mathematical chance of winning.

It became clear that the wet conditions were proving difficult for all the drivers, which affected the levels of grip along the 2-mile Snetterton circuit. After an intense 30 minutes, Smiley made his intentions clear by setting a pole position tome (over half-a-second ahead of Ley). Ley was forced to start from the back of the grid due to an engine change. Proving beneficial as he was nearly a second ahead of Bradley Hutchinson. Gaps which were previously unheard of for this seasons TCR UK grid.

Normal service resumed however from 4th through to 11th, as it was less than a second separating them.

A heavy downpour just before the start, conditions eased slightly as cars lined up on the grid. Proceedings began with two laps behind the safety car and consequently a rolling start. Having the clearest view of all, Smiley nailed the getaway and by the end of the first lap in race conditions and managed to pull out a gap of over two seconds ahead of Kent, Hutchinson, and Smith.

Grip was improving with every lap, but the standing water on the outside of Bomb Hole, managed to catch out both Kent brothers, Lewis and Bradley. Both thankfully were able to continue.  Shepherd was the next title contender to slip out of contention, pulling his car off the track and straight into retirement. 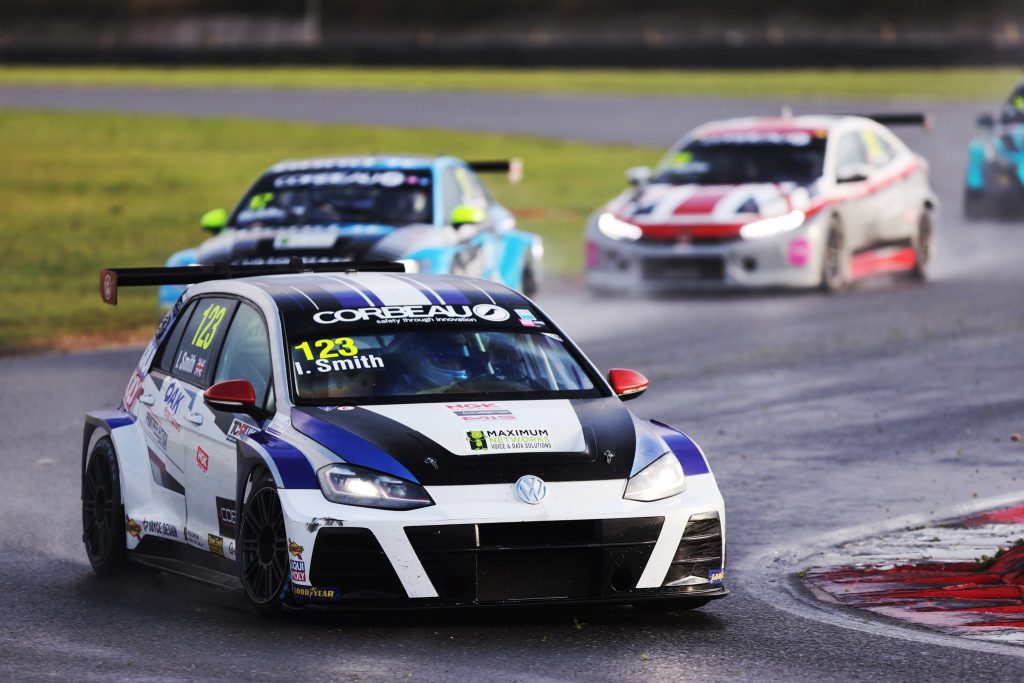 Bradley did however retire a lap later. Allowing Hutchinson and Smith to battle for second place, and with roughly six minutes to go, Smith squeezed passed and set his sights on closing the gap to Smiley, who himself was now eight seconds in front. All that remand on the last few laps was the two main contenders exchanging fastest laps, and that crucial additional point that comes with it.

Smith was the one who managed to achieve the fastest lap in the end. Paired with the fact Smiley’s lead (now cut down to 5.7 seconds ahead) was enough to see him clinch his second victory of the season. It was now only these two men who were in with a chance of winning the title, only eight points separating the both of them.

For the Goodyear Diamond Trophy (for over 40’s) it was Andy Wilmot who scored maximum points.

Even though the track was still damp, there was no rain for the past two hours. So the conditions going into race two were better than they were for race one. As per regulations, the top ten is reversed to give the grid for the second race, causing Smith and Smiley to start from P9 and P10 respectively. Also meaning M. Wilson was on pole, ahead of D. Wilson, Ley, and Kent.

M. Wilson and Ley were on the more slippery right-hand side of the track, and D. Wilson and Kent made the most of their traction advantage, leading the pack into the first corner. Kent passed D. Wison, to leac the race at turn two. The rest of the field meanwhile were bunched up, with Smith clearly on a mission. On the other hand Smiley was balancing his options regarding keeping out of trouble but not losing too much ground on his rival. 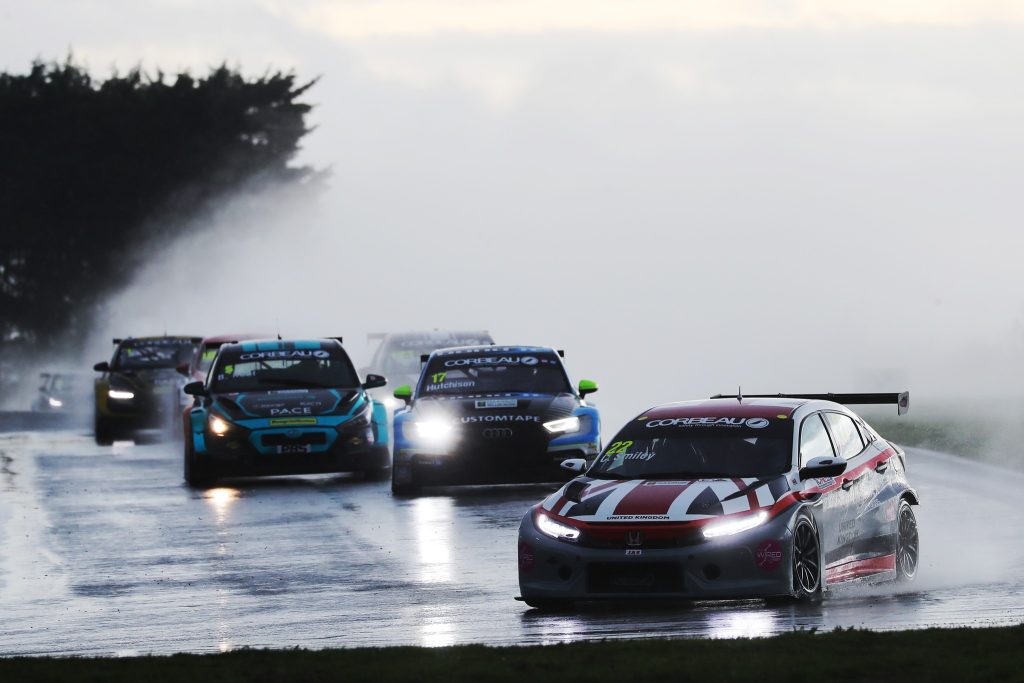 With the knowledge that he had to put cars between himself and Smiley, Smith continued his charge through the field and was up to fourth by the end of lap three, only Kent, Constable, and Ley were ahead of him. Smiley’s plan was to stay close and mirror every move of Smith, managing to get up to fifth himself, shadowing him the whole way.

It was at halfway when things began to change, with Smith edging past Ley on the inside of Riches Corner. Half-a-lap later, almost like clockwork Smiley did the same at Coram. Realising the gap to Constable was over five seconds and unlikely to be caught, Smith began to drive more slowed and tactically. Slowing down backed Smiley into the pack of Ley, Kent, and Hutchinson, surely hoping that one of them could overtake Smiley.

With just three minutes left of the race, Smith ran wide at Riches. Taking to the grass, causing him to drop four places. Smiley now knew all he had to do was finish the next two laps to be crowned 2022 TCR UK Champion, which he did in due course.

Kent drove a faultless race to take his second victory of the season. Constable and Smiley finishing just behind. Ley finished fourth, Kent, Hutchinson, and Smith (who crossed the line in seventh.) Winfield finished eighth, causing him to finish third in the overall driver standings.

The battle for the Tom Walker Memorial Trophy was won by Smiley, who also picked up the Sunoco Driver of the Day award.

Smiley is now preparing to represent the UK in the Touring Car category at the forthcoming FIA Motorsport Games, taking place this between 26th-30th October, at Circuit Paul Richard.

“What a year – and what a final race! I had a good a start and, with Isaac (Smith) the only other driver who could still take the title, I needed to stay in contention with him and keep out of trouble. To win, he needed to put a car between us and he tried every trick in the book to back me up so others behind could catch me. So, when he went wide at turn one and lost a few places with two laps to go, I just needed to hold tight and make it to the finish. 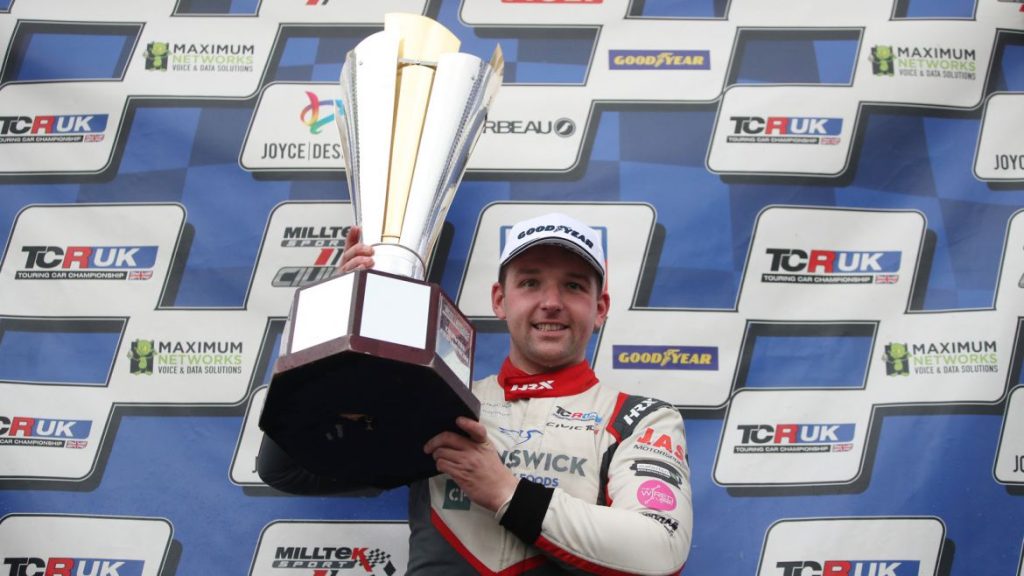 “It’s been an absolutely awesome year and I’ve really enjoyed it. We’ve had some highs and a few lows, but the outcome of today makes everything worthwhile. The Restart Racing guys have done a fabulous job and the car has been great all season. I have to say a big thanks to the whole team, the championship and everyone who has supported us. It feels so good to have achieved what we set out to do this year.”

“I would like to congratulate Chris and the Restart Racing team for a job well done and extend my thanks all the teams and drivers for joining us to make 2022 the best season ever for TCR UK. I must also thank our partners, who’s support has been invaluable in helping us develop the championship into what it is today. I look forward to seeing how Chris gets on in next weekend’s FIA Motorsport Games and announcing more news about our 2023 season over the coming weeks.” 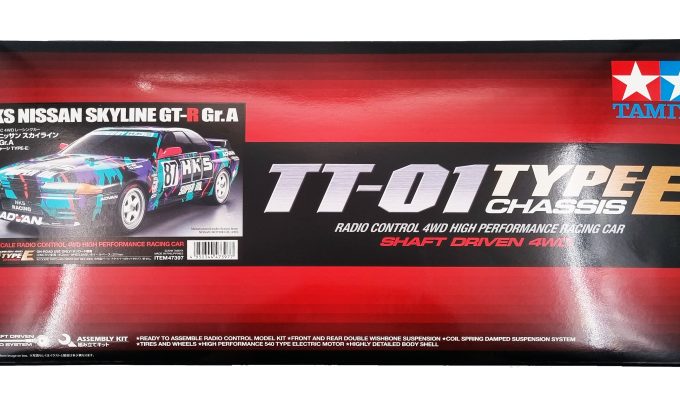 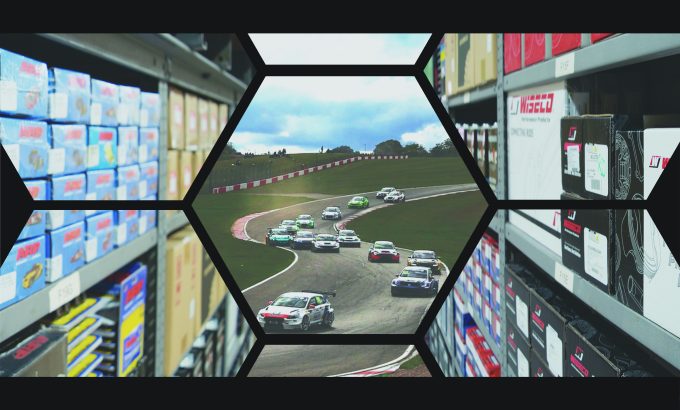 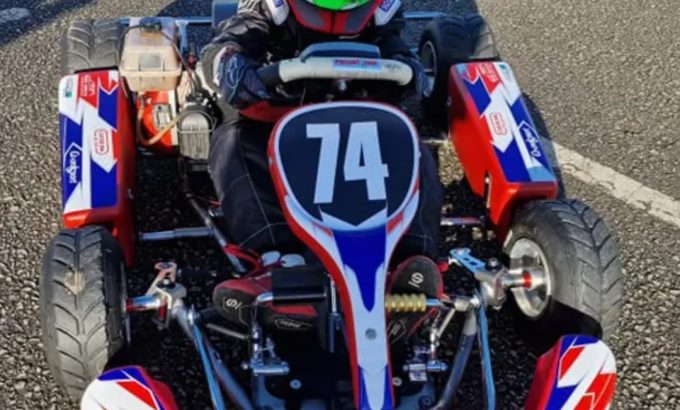 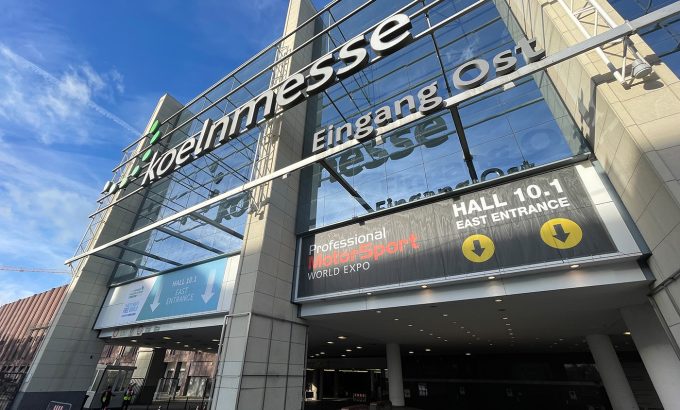