An Introduction to the Motorsport Co-ordination & Management Specialists

Co-ordSport is a well-established and highly successful motorsports specialist. The company distributes specialist vehicle parts and has built and run rally cars with many major teams including Mitsubishi Motors Corporation/Ralliart inc., both of Japan, Mitsubishi Motors North America Inc. and Proton Cars Corporation/EON Motorsports of Malaysia, in events around the world.  Co-ordSport wholesales and retails motorsports parts, primarily for Japanese performance and competition vehicles, especially the Mitsubishi Lancer Evolution.

Peter Collinson, a former Manager with a UK Merchant Bank and rally co-driver since 1974, moved from the world of banking in 1988 to establish Co-ordSport. Using his strict training in the UK banking industry, to effectively control the growth of the Group of which Co-ordSport is now part, along with business partner and former race driver, Jon Kirkham.

Co-ordSport – the name representing ‘Co-ordination of Motorsports’, has had a long and successful working relationship with Ralliart Inc. in Japan and has actively assisted in the smaller developing market areas by providing technical and sales support to Mitsubishi Motors distributors and motorsports teams in those regions.

As a leading Ralliart Sports Parts Reseller, and European leader in that business, Co-ordSport maintains one of the largest stocks of parts for the Lancer Evolution cars.  These parts are distributed to customers worldwide.  The company supplies customers who use their cars for competition and/or street use.  Also stocked are many special accessories for a large variety of road cars and Co-ordSport is an official distributor of Cusco Chassis tuning parts, HKS engine tuning parts, KAAZ Limited Slip Differentials, ARP fasteners, JE & Ross Pistons, JR Air Filters, EGR Styling Goods and also a dealer for AP Racing Brakes, Compomotive Wheels, Ricardo Transmissions, Recaro Seats, SFS Hoses, PIAA Lamps/ wipers, Carrillo & Oliver con rods, Fidanza Flywheels & Pullies, plus many other products.

Co-ordSport is part of a Group of Companies that established Ralliart UK in 1999, which was set up as a joint venture with The Colt Car Company, the Mitsubishi Motors distributor in the UK.  Ralliart UK was developed as ‘The Centre of Technical Excellence’ amongst the network of official Mitsubishi Ralliart dealers in the UK; developing and building highly-acclaimed special models street cars such as the eXtreme and RSX. Its active promotional work has succeeded in making the Mitsubishi Evolution one of the most desirable and respected performance sports cars available and establishing the Ralliart name in Europe. In 2002 Ralliart UK was sold to the Colt Car Co. and the West Midlands based car retail operation was re-established under the Xtreme Automobiles name.

The first major motorsport event for Co-ordSport was to run a Five-car team in the 1988 Lombard RAC Rally, Britain’s round of the FIA World Rally Championship, in conjunction with Japanese associates Tusk Engineering.  The cars were Group A and Group N Mitsubishi Galant VR-4s and the Japanese drivers included factory driver Kenjiro Shinozuka.  On what proved to be a very hard rally, the team got three cars to the finish.  Co-ordSport and the team moved on to compete in the 1989 FIA Asia-Pacific series and selected World Rally Championship events.

On all events the team was made up of a mixture of UK and Japanese personnel, with Co-ordSport’s Peter Collinson taking a leading managerial role, co-ordinating service planning and logistics. The events entered in 1989 included Portugal, Acropolis, Australia, New Zealand, Indonesia, Malaysia, and Himalayan Rallies.  Results included Group N wins in Portugal and Greece (Kiyoshi Inoue), while Shinozuka finished 3rd in the FIA Asia Pacific Rally Championship.

For 1990 the company was once again involved with Tusk Engineering and Kenjiro Shinozuka, running as the Mitsubishi Oil Citizen Team.  The premier event in the programme was the Marlboro Safari Rally in Kenya, where Shinozuka finished 5th overall driving a car built in the Co-ordSport workshops.  An excellent result for a first attempt at the notorious Safari Rally and on an occasion when the event was so tough that only 10 cars reached the finish in Nairobi.

Based upon these successes, the business has developed rapidly and apart from being well experienced to deal with the build, development and running of most competition cars, is able to introduce and promote products into the European markets.  The company deals with the import/export of competition parts between Asia/America and Europe. In turn providing a motorsports parts service to many overseas customers.  Exports include Argentina, Austria, Australia, Belgium, Canada, Chile, Croatia, Cyprus, Czech, Denmark, Finland, France, Greece, Holland, Hungary, Indonesia, Ireland, Italy, Jamaica, Japan, Kenya, Malaysia, New Zealand, Norway, Poland, Russia, Singapore, Slovenia, Spain, Sweden, Switzerland, Ukraine, USA and West Indies.

Notable motorsports results include Kenjiro Shinozuka’s 1st overall on the Rallye Cote d’lvoire in both 1991 and 1992, these being the first and second FIA World Rally Championship wins by a Japanese driver.  The 1991 car was prepared at Co-ordSport and its mechanics made up a large part of the Anglo-Japanese team in both years.

Also in 1991 Co-ordSport ran Hideaki Miyoshi in a Group A Galant VR-4 in the British National Rally Championship, finishing 2nd overall and nominated best team with the most reliable car.  Highlights were the outright wins on the Vauxhall Rally of Wales (the first rally win in the UK by a Japanese driver) and the Severn Valley Stages Rally.

Throughout 1993 to 1997 Co-ordSport progressed its development of the Mitsubishi Lancer RS Evolutions.  Shinozuka finished 2nd overall on the 1994 and 1995 Safari Rallies, driving Group A Lancers, with support from Ralliart and Co-ordSport mechanics.  Whilst the car won Group N on various events in Europe, Miyoshi finished runner up in the 1994 European Rally Championship for Group N, driving another Co-ordSport prepared Mitsubishi Lancer Evolution.

Meanwhile, back in the UK and Europe, Co-ordSport ran, maintained and generally assisted the running of rally cars for a variety of international private drivers, many who went on to become professional drivers, including Tommi Makinen, Harri Rovanpera, Tapio Laukkanen Ed Ordynski and Masao Kamioka.

Since the early days of Co-ordSport’s sporting success, the firm has further developed the commercial side of the group’s business, dealing with the sales of base cars and parts, also the co-ordination and management of customers’ rally teams and cars.  Assisting teams to develop not only their cars, but also their team’s infrastructure.  Co-ordSport helps teams to source the most competitive parts and services at the best possible prices – ensuring they can perform to their maximum, within their budgetary limits. Also customers have been encouraged to develop commercial opportunities, allowing them to expand their business profile beyond purely motorsports activities.

During the last 5 years Co-ordSport has expanded its auto parts business, whilst the group established Ralliart UK and more recently Xtreme Automobiles, resulting in the combined turnover growing to in excess of £13 million per annum. Co-ordSport aims to expand its business further, seeking diversification within the specialist auto field and expanding into new territories. A subsidiary Company was established in Germany during 2007 –
Co-ordSport GmbH 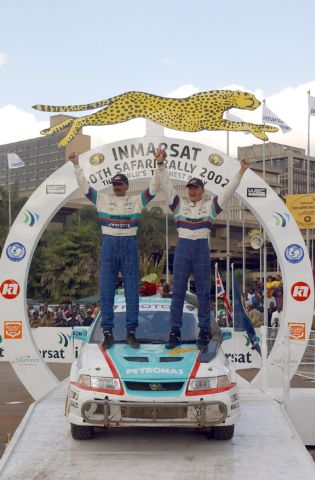 Co-ordSport stepped up its motorsports management services in 2002 by again running a team in the FIA World Rally Championship – this time for the Petronas EON Racing Team of Malaysia. The team provided Malaysia with its first World Rally Champion, Karamjit Singh, who is also the reigning FIA Asia Pacific Rally Champion (2001 and 2002).

With a Co-ordSport managed Proton PERT (Mitsubishi Lancer Evolution 6 badged as a Proton – Proton being part owned by Mitsubishi Motors), Singh scored maximum points in the 2002 Production Car World Rally Championship category on 2 out of his first 3 events (Cyprus and Safari Rallies – finishing a superb 10th overall on the Safari). This enabled him to establish a clear lead in the 2002 FIA Production Car World Rally Championship, with three rounds remaining (Finland, New Zealand and Australia) and he went on to easily win the series.

This was a major step in Co-ordSport’s global expansion plans. Unfortunately, despite the major successes of the team, MMNA decided to redirect their marketing efforts from 2004 and withdrew from all motorsports activities (and hasn’t re-entered officially to date).

Co-ordSport remains a supplier to the American market.

Co-ordSport was a founding partner and underwriter of the first Mitsubishi Evolution Challenge, which is now run in the UK, Ireland and Sweden by RPM Promotions.

Co-ordSport has established a facility for the production of special engineered motorsports components, including composites and machined parts. XWorks Automotive already supplies clients such as Prodrive. That Company and it’s engineers have produced a one-off prototype sports car, utilising a carbon fibre monocoque and Lancer Evolution engine and running gear – 400+BHP and 4WD, with an overall weight of around 1000kgs! 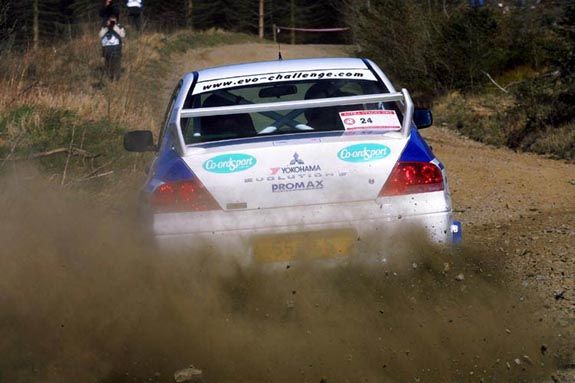 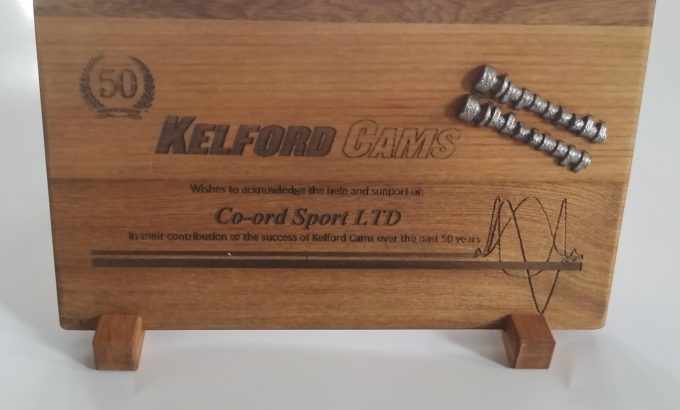 It's always nice to be appreciated