Co-ordSport produced several Group N and A Galant VR-4 rally cars, for teams and drivers around the globe. In October of the year, MMC launched the Lancer Evolution, soon to become an icon of rugged performance.

Our home World Championship event, the RAC Rally, was always a big draw, especially at the end of the year, and we often got asked to help. This year we had to help several cars, including Lasse Lampi in a works test car. 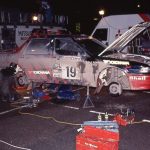