Cosworth is a premier supplier of high-quality components for the performance aftermarket.

Every one of their products is engineered to Cosworth’s exacting standards and all are designed to maximise the performance of the vehicle without compromising reliability, consistency and crucially the driving experience.

Cosworth has been at the forefront of motorsport activity for over 50 years and is a brand synonymous with success. Cosworth continues to develop and supply exciting powertrain and electronics products for use at all levels of the sport, from class leading ‘off the shelf’ products at clubman level, through to bespoke ‘state of the art’ developments for the pinnacle of the sport.

Cosworth High Performance Parts are designed to deliver optimal performance for a range of the most popular production cars.

Since it was formed in 1958 by Mike Costin and Keith Duckworth, Cosworth has become the most successful independent engine manufacturer in history as well as one of the market leaders in performance electronics, with a string of driver and manufacturer titles to its credit in a wide range of formulae with impressive performances in Formula One, IndyCar, Champ Car, WRC, sportscars and MotoGP.

Cosworth began life in a small workshop in London in 1958. However, things quickly grew and a move to larger premises was soon required. The company moved to north London, where it began working on the development of the Ford 105E engine. Cosworth actually achieved its first victory when Jim Clark took a win in the Formula Junior category in his Lotus 18 at Goodwood in 1960.
The classic motorsport era
By the mid 1960s, the company had moved to Northampton where bigger prospects were around the corner. In 1966, Duckworth signed a contract with Ford to develop a new three-litre Formula One engine, and the legendary DFV was born. It got its first taste of victory in 1967, when Jim Clark again provided the maiden victory at the Dutch Grand Prix. The DFV, in subsequent development guises, went on to dominate the sport for 15 years and clinched 155 race wins during that time.

The 1980s & 1990s
Cosworth’s success continued through the 1980’s and 1990’s in a range of championships around the world. The Ford Sierra RS500 Cosworth and XG V6 powered Mondeo both won the World Touring Car Championship and the Zetec-V8 F1 engine powered Michael Schumacher to his first world championship title. In North America the DFX and XB engines dominated the CART/Indy formula leading to Cosworth receiving the Queen’s Award for Export achievement in both 1986 and 1992.

This same period witnessed the spectacular growth of motorsport electronics and the establishment of data recording and analysis as a cornerstone of modern high performance motorsport. In 1987 Cosworth’s electronics divison was founded by Tony Purnell under the name Pi Research. The company initially focussed on providing electronic instrumentation for race teams and racecar manufacturers wanting to improve the quality of their data from wind tunnel testing. The extension from wind tunnel data gathering instrumentation to on-car data acquisition systems was the natural progression – and the Pi Research “Black Box” was born.

Used extensively in the North American IndyCar Championship, the Pi Research Black Box was the first electronic dash display and combined data logger to be used in professional motor sport. The success of the product in allowing teams to analyse performance parameters of the car, engine and chassis, as well as providing clear, accurate information for the driver marked a turning point in race car technology and defined the future for motorsport.

In 1989 Pi Research opened a sales and support office in Indianapolis to ensure the best local support for its US customers. Ensuring that customers receive the technical support they need is something that has been a priority for Cosworth’s electronic division throughout its 21-year history.

At this time Pi Research acquired Pectel Control Systems to complement its data acquisition technologies with world-class engine and chassis controllers for a wide range of motorsport customers. Development, assembly, sales and technical support of Pectel controller products is now located at the Cambridge site.

Cosworth was bought by Ford in 1998 and the company became works engine suppliers to Stewart Grand Prix and its successor Jaguar Racing. Success also continued in the wider business arena and in 2003 Cosworth was voted the MIA business of the year.

During 1999, Cosworth also opened a facility in Mooresville, NC, to focus on the needs of the American Stock Car market. From this site, Cosworth supplies and services teams in all categories of closed-wheel oval racing from local short track teams to every team at the top level in Cup.

In 2004, Cosworth was purchased by Gerry Forsythe and Kevin Kalkhoven, co-owners of the Champ Car World Series (the successor to CART). Under its new ownership and a management team lead by CEO Tim Routsis, Cosworth embarked on a successful diversification strategy, exploiting business opportunities in the Automotive, Aerospace and Defence markets.

In January 2011, the Motorsports Industry Associated (MIA) recognised Cosworth’s diversification success with the 2011 New Markets Award. In November 2011, Cosworth’s successful diversification into mainstream high value-added manufacturing in the UK was rewarded with the prestigious RBS 2011 Manufacturer Of The Year Award.

Through years of engine design, development and test programmes Cosworth understands first-hand the requirement for prototype components in a timely and cost effective manner. In order to accommodate this requirement Cosworth’s machine shops are set up to cater for prototype manufacture through to low / medium volume. 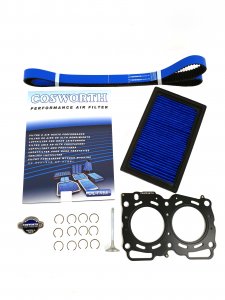 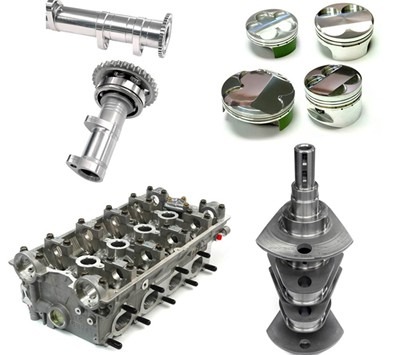 Cosworth specialises in the manufacture of:

Cosworth prides itself on the quality of the manufactured components produced and in addition to holding ISO 9001 certification; Cosworth’s manufacturing department has achieved the prestigious AS/EN9100 accreditation allowing the manufacture of products for the Aerospace sector. This impecable level of quality along with short lead times and high levels of responsiveness contributed towards Cosworth being named Manufacturer of the Year 2011.