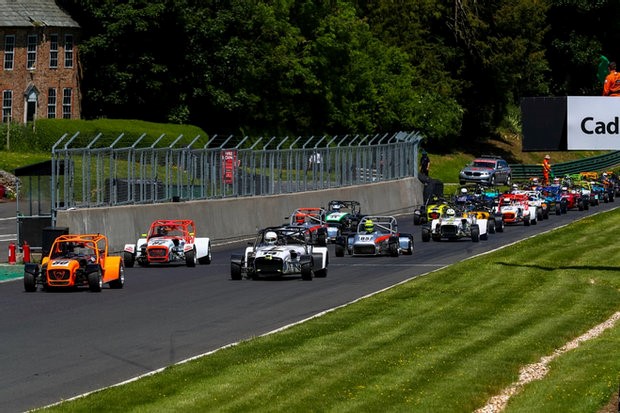 Rewarded with warm weather throughout, the temperatures actually came as a shock to many on Sunday, after so many months of cold and wet. Grid sizes were considerably lower than the huge numbers Donington had attracted, a fortnight before. A consequence of location, reputation and number of meetings in quick succession. This meant that those who did attend, enjoyed that happy compromise, with space to put together consistant laps and enough cars to produce a good battle.

David Stallard’s photography and Marc Peters’ video far better captures the atmosphere, action and weather than any amount of words can.

Lets start with Marc Peters, with video action from the ‘Classic’ Day first, then moving on to the ‘Modern’ cars later.

Official club photographer, David Stallard has found new angles to take photos of your cars, with many of his old haunts out of bounds these days, due to circuit safety policy. Please view and purchase David’s photos from his website. I hope you’ll agree he has produced excellent results, given the challenges of exposure across the weekend. He offers a club member’s discount, contact him directly for details.

A big thank you to our volunteers, Marshals, committee members and many other volunteers cooked in the heat, on Sunday in particular. Members donations helped to pay for 96 bottles of water, that were distributed to each Marshal post on Sunday, thank you to MSV for reducing the price to the club.

If you want to see the complete lap and position breakdown, pit stops times and more, click on ‘view pdf book’ beneath your series.

There is no such thing as a perfect, fault-free race meeting, but this was a good ‘un, drivers showed respect for each other and the circuit. Everyone completed their online sign on and scrutineering in good time. Thank you, we really didn’t want to see anyone fined or refused an entry on the day. The Motorsport UK Clerks assigned to judicial matters had one of the quietest race meetings for some time, whilst the safety car team were able to take full advantage of their air-conditioned comfort, being scrambled just once. The Chief Clerk, Robert Williams wanted to pass on his thanks to the drivers, for their pit stop discipline and safety, singling out both Gold Arts Magnificent Sevens races for special praise.

With time between meetings short we regret that there is only one full race report, but there are a few worthy mentions:

Long time rivals in the Adams & Page Swinging Sixties Series, Tim Cairns kindly offered a drive to Ian Everett in Tim’s Modsports Midget, in the first JMC Racing Special Saloons and Modsports race. Having covered just a few laps in qualifying, Ian was understandably nervous in race 1. Inevitably losing the lead at the rolling start on the charge to Coppice, where power counts, Ian moved from third place back to the front on lap 4. Ian took the win and eclipsed the team’s qualifying time too. The crowd were sadly denied Ian’s ‘Ricciardo’ perma-grin, by dint of needing to wear a full face helmet but still, it saved him from swallowing Lincolnshire’s finest invertebrates.

Congratulations to Craig Percy, who took his first ever overall race win, well deserved after taking part in almost every JMC Racing Special Saloons and Modsports round since 2016. Craig and his V8 Morris Minor resisted race-long pressure from a number of drivers in the second race, most notably Martin Reynolds, who finished just 0.323 seconds behind. Tim Cairns was back behind the wheel of his MG, fighting from the rear (winners penalty) to finish 0.8 seconds behind by the flag.

Another first time CSCC winner was Russell Thomson, who has raced a Clio with us periodically since 2013, in the Co-ordSport Tin Tops. The win looked briefly in doubt, after a genuine accident, where a lapped car misjudged his braking, tapped him from the rear and on to the grass at Gooseneck (apology post race was made and accepted). Russell would go on to win by 4.066 from Tom Mensley. Bad luck for Adam Brown, with a drive shaft failure on the last lap, losing a certain class win.

The Advantage Motorsport Future Classics race was thrilling, to the flag and as it turned out, beyond it too. Matthew and Martyn Ellis drove their Lotus Sunbeam superbly, resisting the advances of the lighter, lower powered mk1 MX-5 of Sam Smith, the pair seemingly joined by elastic as parts of the circuit played to the different strengths of their cars. Team Ellis crossed the line first after re-passing Smith with just two laps to go, but the timing system showed a short stop of just 0.9 seconds. With the penalty applied it gave Smith the bragging rights, but each would win their respective 70’s and 80’s groups outright regardless. Oliver and Martin Pratt could only look on and wonder what might have happened. Having taken pole position in qualifying they were pushed into the pit lane from the race grid, with a faulty gasket on their Morgan causing a fuel leak.
Oliver Smith enjoyed a roller coaster of a weekend in his BMW E36 M3, in his second ever appearance with the CSCC. An outright win and Driver Of The Day accolade in the combined Liqui Moly New Millennium/Verum Builders Open Series race was almost followed by the double in the Cartek Motorsport Modern Classics affair. An innocent misunderstanding of rules on UK showroom aero correctly gave the win to Dave Griffin. Smith took the ruling in good spirits and will be back for more.
Jasver Sapra, competing at Cadwell for the first time once again, impressed with the clearest of signals that he was going to enter the pits. It sounds like the simplest of things, after all it’s just hand signals and positioning his E46 M3, but it makes a big difference to the safety of all around him. His clear signals were something we witnessed at Donington too, when Jas had a car close behind; keep it up sir.
Proof that you don’t need a large grid to have a great race was demonstrated by Steve Chapman (TR4) and Nick Jesty (Mini). Aside from the pit stop phase, the pair were less than a second apart for all but one lap of the 40 minute Mintex Classic K contest! Steve won the duel by 0.372 of a second, taking 2nd in class C, with Nick winning class F. A superb demonstration of nose-to-tail racing without contact.

Double wins were had by Ben Simonds (Group 2) and Simon Griffiths (Group 1) in the pair of Gold Arts Magnificent Sevens races. Not an easy task up against an almost capacity grid.

CSCC Committee member, Vicki Cairns was there in person to give us her view on the Adams & Page Swinging Sixties races:

It was great to be back at this fabulous Circuit and to see everyone again. The weather was glorious, though perhaps not all the cars or drivers enjoyed it by the end of 40 minutes. Group 1 and Group 2 were split at this meeting and it was Group 1 which was out on track for the first qualifying session of the day. Group 2 were next, so there was no lie-in for anyone.

One notable absence was Chris, who is part of the “Grime Reaper” Mini team, we all wish him a speedy recovery from the major surgery that he had last week. We look forward to welcoming him back to the paddock.

There were several drivers in contention to take pole position, in the incident free, 30-minute session. Perhaps it was as the track warmed up, that the fastest laps tended to be put in – with 4 of the top 5 cars doing their best times on the last few laps. Pole-sitter, Tim Cairns (Turner), did his best lap on the very last attempt, as did Chris Watkinson (Austin Mini).

The front of the grid was Cairns by half-a-second, from Ian Whitt, with Ian Staines (MG Midget), Richard Merrell (Alfa Romeo Giulia), Watkinson, and the Nick Aveyard & Rob Sinclair Midget all within another half-a-second of each other.

After the lights went out, Cairns lost 2 places when the Turner decided not to go into second gear and he was passed by Merrell and Staines, so it looked like it would be a close race, though there were two previous race winners, with 30-second penalties, in the mix: Merrell and Watkinson. Staines maintained his lead and throughout there was only a gap of 4 and 6 seconds between him and Cairns. Staines had an extremely fortunate pit-stop (though he did not know it at the time!) as his pit-lane duration was just 6/1000ths of a second the right side of 2 minutes!

There was a frightening incident just as the pit-stops began. The Mini of Simon & Robert Dawson found itself alongside Tom Pead’s BMW as Pead attempted to make his pit stop, the Mini being squeezed onto the grass coming down towards the pit entry. There was no chance of slowing or steering the car out of trouble and it hit the barrier on the right side of the pit-lane and ricocheted back into the pit-lane entry. The marshals did a superb job and managed to push the car far enough back for the race to continue without needing a Safety or red flag. Several drivers had their race compromised, including Kym Bradshaw, as they had to queue to enter the pit-lane while the car was moved, although fortunately there was no damage to any other cars.

When the chequered flag fell there were only 5 drivers on the same lap. Staines took the flag, and won himself a future 30-second penalty, with Cairns 9 seconds behind. Merrell was third, overcoming his winner’s penalty and the Hillman Imp (lovely to see that out!) of Simon Benoy was in fourth place. The last car on the same lap was that of Tom Pead in the BMW.

It was beginning to get very warm when the Group 2 cars went out to practice, although it was still before 10am. Perhaps that was the reason that some of the drivers decided not to stress their cars and came in before the end of the session. Jamie Keevill put the Lotus Elan on pole by just over 1 second from father-and-son team of John & Tom Muirhead’s Lotus Super Seven. Third place on the grid went to Jon Crayston in the Lotus Elan S4. The latter two cars did their best times on their very last laps of the session. Neil Sinclair (Lotus 7) was fourth but, sadly, was unable to complete the first lap of the race. Ben Gough in the Marcos, that he usually shares with Iain Daniels, did 7 laps; but, due to car problems, was unable to take the start.

From the “off”, it was Jamie Keevill in the lead. He held this position for the whole race, winning by 9 seconds from the Muirheads’ Lotus 7. However, it was the fight for third and fourth place which was the most exciting part of the race. Early on there were four cars battling each other: Malcolm Johnson (Lotus Europa), Dean Halsey (Datsun 240Z), Dave McDonald (TR6) and Jon Crayston (Lotus Elan). Unfortunately, Johnson retired on Lap 15 and Halsey fell back after the pit-stops. This left McDonald and Crayston in contention for third place. After the pit-stops were completed, the two cars were just 1 second apart with Crayston in front, After six laps of trying, McDonald passed Crayston and was able to retain third place until the chequered flag fell. 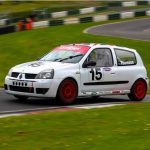 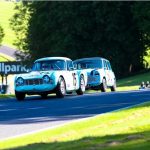 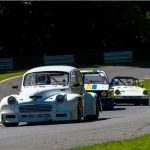 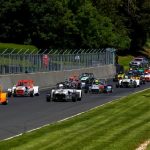 Next we look to Knockhill in just over two weeks time, more on this later today. 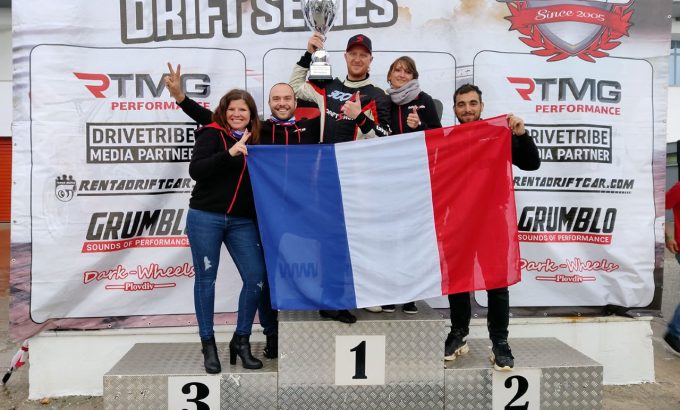 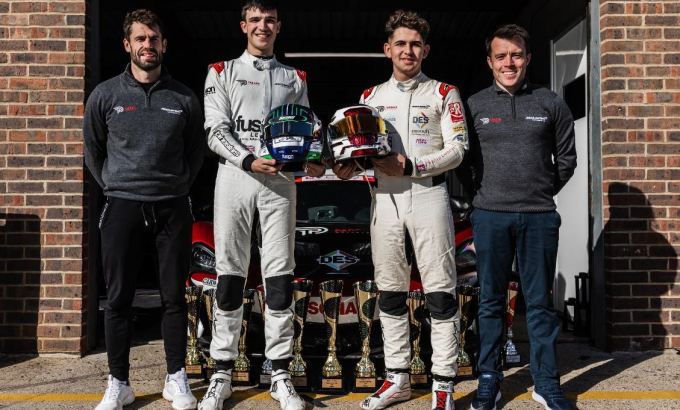 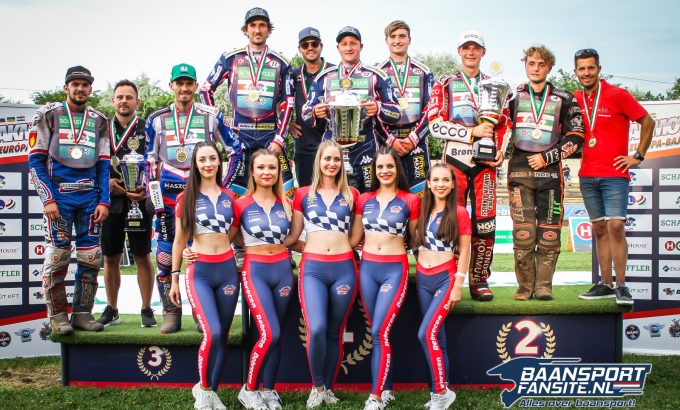 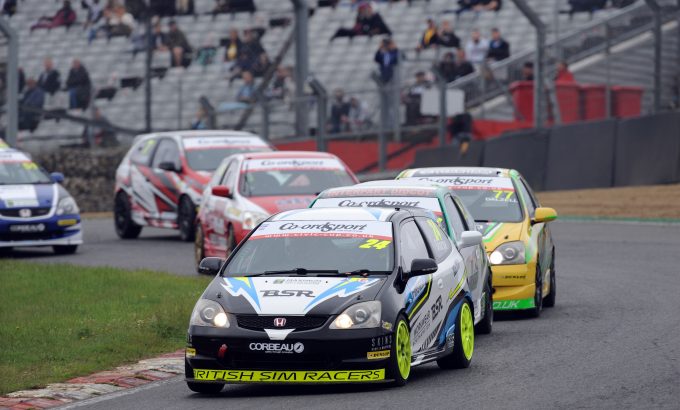