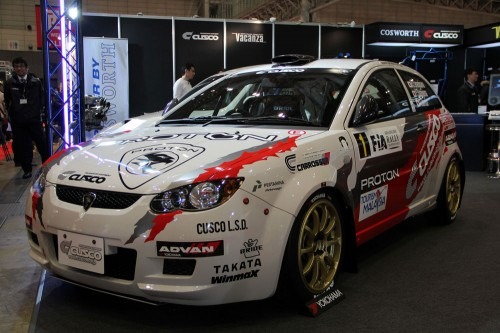 Our partners, Cusco have announced that they will be developing the Proton Satria Neo for use in FIA regulated Group N rally events. As the Cusco distributor for the EU, Co-ordSport sent Peter Collinson and Wouter Vallen to be present at the announcement of the news, which took place at the 2011 Tokyo Auto Salon.

Cusco will buy standard Satria Neo bodyshells and fit them with specially developed performance parts, turning the road-going hatchback into a high performance FIA Group N homologated competition rally car. The completed Group N rally-going Neos will then be sold to customers for competing in Junior Rally Championships in Japan and Asia Pacific.

Already renowned for their aftermarket suspension systems and other parts such as limited slip differentials and chassis reinforcements, Cusco have already been involved in motorsports including rallying, winning the recent FIA Asia Pacific rally with their Evo 10.

For more photos of the Cusco Proton Satria Neo, head over to this article.

The New CSCC calendar is confirmed - The Co-ordsport series, TinTops, soon back in action!