Good Advice on Con Rod Design and choice from PRI

Connecting rods receive a fair amount of abuse, when in the engine and out, this is because they are compressed and stretched with forces that increase exponentially as the engines rpm increases. They are often blamed when there is dramatic engine failure. 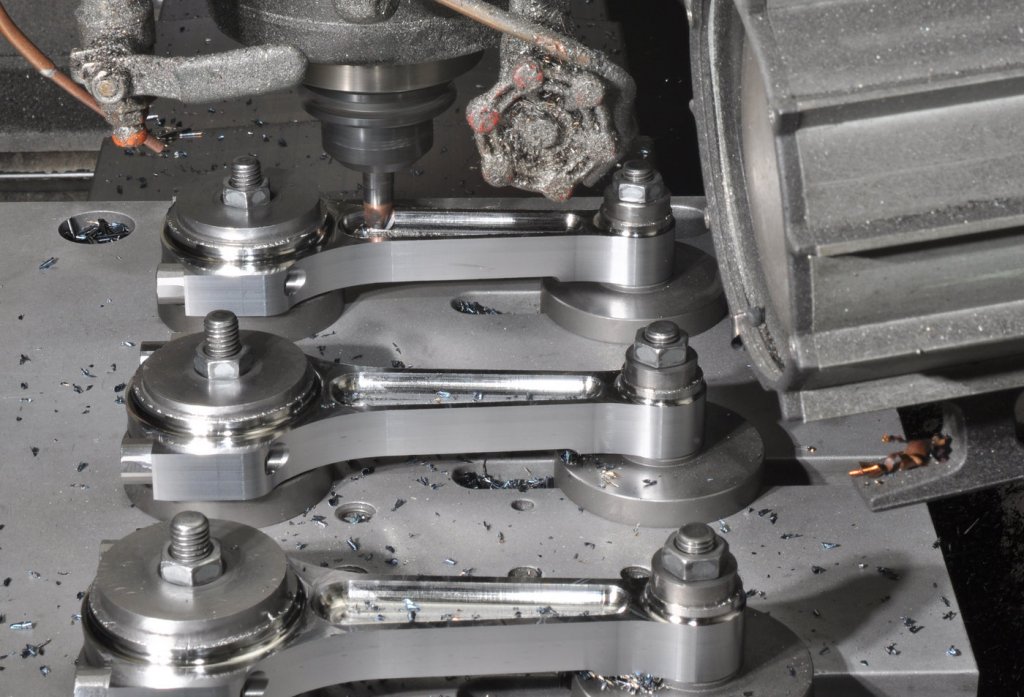 There is no easy formula for selecting the correct connecting rod for a particular application. Rules don’t allow some materials that would benefit the race. The cost is also going to be a determining factor. There isn’t always  consensus on the best connecting rod design or construction. The good news is that advanced computer modelling and FEA (finite element analysis) stimulation combined with years of racing experience have given rod manufacturers a solid data bank that will help tech reps determine a suitable selection when they know the engine builder’s needs.

Shane Turner from Oliver Racing Parts states that their filtering process is through horsepower. “We stat with projected horsepower. Then ask what’s the engine in? What rpm? It is a constant rpm range or does it vary widely? Then we fine-tune it from there.” Meanwhile, Kirk Peters at Lunati, Olive Branch in Mississippi says “some customers are not really sure pf the horsepower they’re trying to attain, often they will unnecessarily spend the extra money and go to a higher rated rod than they need.”

The first thing engine builders must consider is the construction material. There are three popular choices wide;ly available to racers:steel, aluminium and titanium. Occasionally an exotic metal, such as aluminium metal matrix composite, will appear on the market but sanctioning body rules often prohibit that option. Another choice is a fibre reinforced composite, which is half the weight of aluminium but strong enough to conceivably last an entire season in a ‘Top Fuel’ engine.

Titanium has lost favour in many race divisions due to costs or rules which has lead to it being discontinued with some manufacturers. 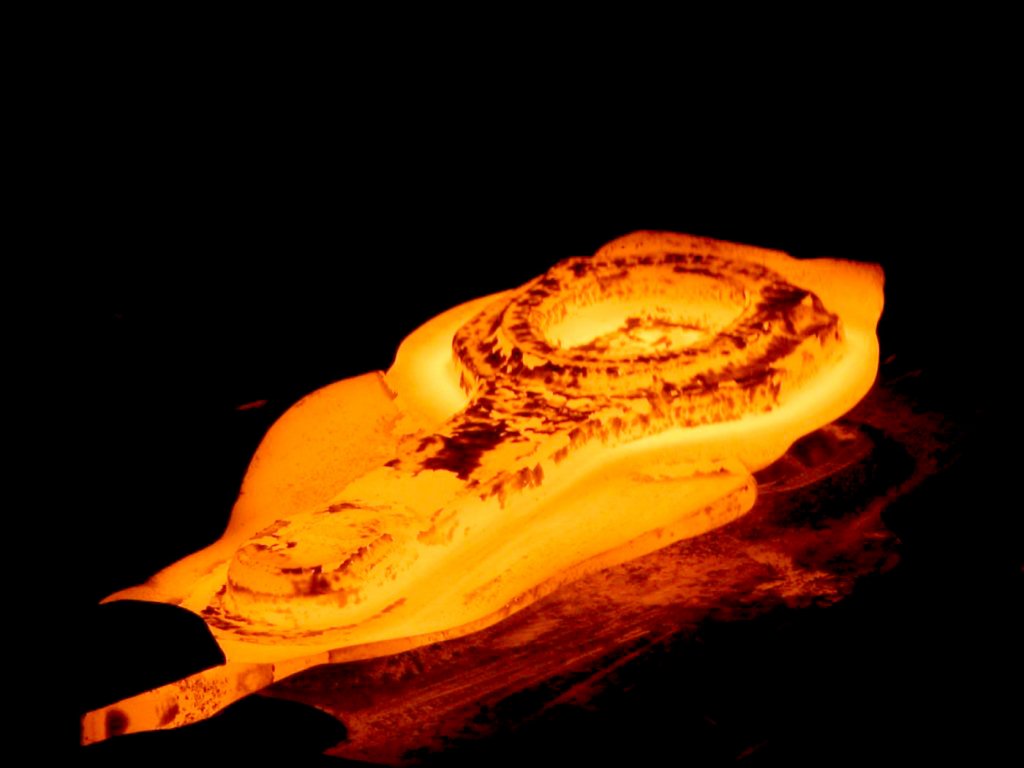 Aluminium is popular with select drag racing classes due to its lightweight properties, as well as dampening effect it can provide in high stress applications, such as boosted and nitro-engines. Thus effect will extend the life of a crankshaft-but the rod needs to be checked and services frequently. Aluminium is also less destructive when there’s a failure. In most racing disciplines, connecting rods machined from either a steel forging or a steel billet are still popular. Steel can weather the stress levels of high-rpm use and is generally affordable for the given application. That is, the more horsepower the more expensive the rod.

There isn’t exactly a definite answer as both sets of people who have those opposite views are comfortable with the choices they have made. Piper believes that the I-beam is stronger because it doesn’t buckle under cylinder pressure.

Whereas Mike Skeen from K1 Technologies is more reliant on the H-beam configuration as “most of the market we serve is forced induction or nitrous.” Both Callies and K1 offer I-beam and H-beam rods with same steel formula, but they market each to specific engine applications bets served by the rod’s inherent design elements. For example, the K1 I-beam is better suited to high rev, low torque naturally aspirated engines, where the company’s H-beam will be suggested for power adders, as well as the LS line where subtle improvements have been applied.

Piper says “Piston and wrist-pin weight dictate how the rod is going to perform. Depending o the model of our H-beam, we will rate them from 50-75 horsepower per cylinder less than an I-beam. Our I-beams have a lot of design features to  make them stronger. our H-beam is really for the masses. It’s easier to make our H-beam, so we can offer it at a cost savings to the customer and still make them a good rod.”

Peters states “Our VooDoo H-beam rod is an offshore rod with ARP 2000 bolts, and in a small block Chevy it’s good for  up to 1000 horsepower. Our Signature Series billet I-beam rod, also with ARP 2000 bolts, can take 2500-plus. The I-beam is a billet configuration and actually a stronger rod than the H-beam, just because of where the material is removed. In a typical I-beam the material is removed from the centre versus an H-beam, where it’s taken down the side of the beam.” 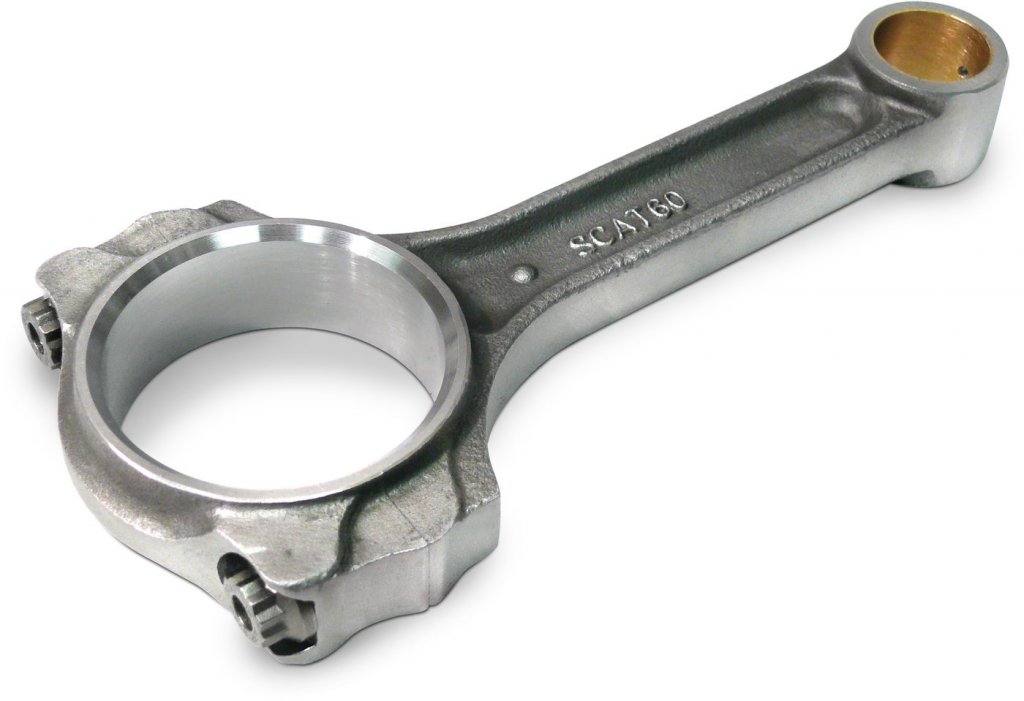 Whereas Davis believes “there is really no strength advantage in running a billet rod versus a forged rod, all else being the same. An I-beam is easier to manufacture, and therefore typically less expensive. But they’re not quite as strong as an H-beam rod. We build an entry level I-beam that is good for stock replacement and mild performance., Then we have a 4340 steel I-beam, which is still a budget rod but made out of a better material and we use a larger bolt. The 4340 steel H-beam is the strongest rod we offer, and we have several different bolt options.”

A member of Oliver Racing Parts states “We old do an I-beam or A-beam- a lot of people cross the two over. But it’s really just an I-beam design and we call it our parabolic beam. A lot of people say an H-beam is stronger. Our approach is that the I-beam or A-beam is designed for high horsepower. We have a standard light rod, then we have an ultra-light rod and a speedway rod. If you were to hold all three next to each other, you wouldn’t be able to tell the difference. But we ass meat in the areas that it really needs it, which is the beam and the cap end.”

At Crower, “Everything we do here is I-beam. The h-beam will be stronger, but it’s more rigid . If you have the same horsepower between an H-beam and an I-beam, and there’s detonation, the H-beam will break where the I-beam has a perfect balance between give and strength. And that’s why we use it, because it will give and then come back into play. The H-beam has no give.”

Lancuba of Saenz thinks that “the bets results are achieved mixing both I- and H- beam design. As a general rule, I-beam is better for high torque engines and H-beam is a better for high rpm engines. Long rods work between in I-beam and short rods with ‘big’ ends are better in H-beam.”

The main facts that we wish to emphasis is that it’s important to embrace the rod-bolt strength and the engagement area of the rod, manufacturers often offer options on rod bolts, either in size, strength or both. Most agreed that there is no downside to getting the strongest bolt possible for the application, except for cost, when the optional bolts is overkill for a budget or low-horsepower build.

Lieb says “Rod bolt failure is 100 percent based on the engine builder breaking the bold when he assembled the engine, and the reason he broke the bolt is because of the way he torqued the bolt. The only way you can torque a cap on a rod is to have torqued evenly on both sides. So, you look at our chart, and if you torque it 65 pounds and the other side to 65 pounds, the rod will be round.”

Turner adds “we do a torque plus degrees. Torque it down to X amount of foot-pounds, then go a certain number of degrees after that. But we also include stretch numbers. The reason we do that, there seems to be an argument one way or the other. We could survey 20 engine builders and 10 will say torque plus degrees. The other 10 will say stretch only. So we give them both numbers, because we want to accommodate both.”

Bryan Bill from AWA Composties, which is a group of aerospace engineers with a passion for auto racing said “I would say that if the rules permitted, they would already have carbon fibre connecting rods, Formula 1 and FIA have long realised that it’s definitely a competitive advantage to have lightweight rotating assembly. We started looking at various types of composites. We had to come up with a fiber architecture that would be consistent in handling and mitigating the stress loads in the hostile environment of a racing engine.” 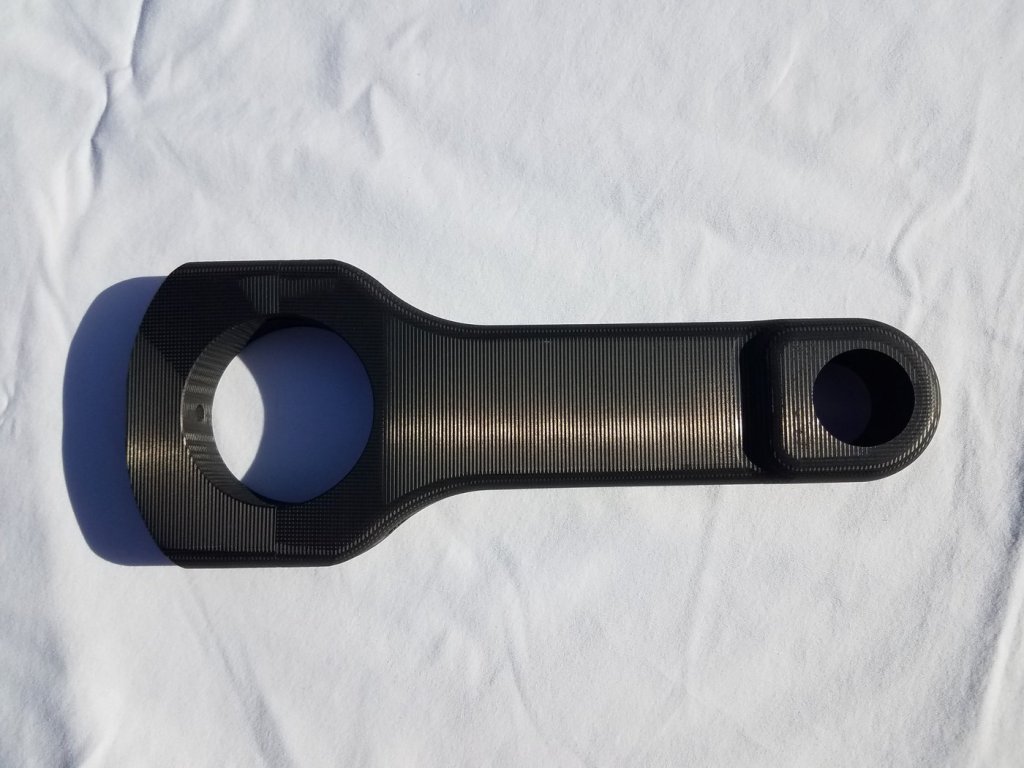 “There’s no other racing that equals the power in a Fuel Car. So we wanted to start at the top to be able to show our technology. For our first iteration we were able to hit 98 percent of the market, meaning that we were not able to handle the stress loads in the current design connecting rod being that those loads are in excess of 130,9000 psi.” said Gill. That means the first AWA rods can comfortably handle around 4000 horsepower.

Gill further states that “For any of the Pro Mod cars, we have a vastly superior product that’s hold weight of the aluminium.” AWA won’t discuss manufacturing specifics. It’s not a conventional inter-laminate process but rather a three-dimensional fibre architecture. The material, however, cannot be threaded for the bolt, so a nut has to be anchored opposite of the cap. The little end of the rod is  bushed, as with many traditional applications. It’s currently available in a number of lengths and for almost any type of engine. And it is expensive, at about $2000 a rod.

A compositie connecting rod is unlikely to be the last significant breakthrough for racers and engine builders. Consider the possibility of a hollow metal rod, which theoretically would have superior strength properties as well as low weight. Hollow rods have already been manufactured by wielding the halves together, but that isn’t very practical. The rapid advantage of 3D printing, however, will open all kinds of design possibilities for rod engineers. Not only can a one-piece hollow rod produced in one shot, but intricate internal latticing can be created to improve strength beyond today’s offerings. It’s just up to the imagination of the engineer.

Co-ordSport are dealers for K1, Oliver and Bridgeway con-rods.