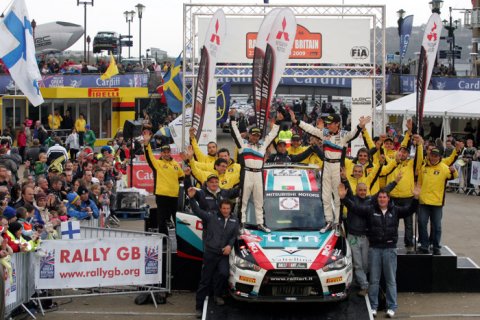 We are happy to announce some exciting news from our good friends over at Ralliart Italy… Mitsubishi Motors Japan has decided to delegate to Ralliart Italy all its rally sporting activities, both technically and commercially. What is more, Mario Stagni, Ralliart Italy’s team principal, will also be looking after FIA relations.

Ralliart Italy will be handling the technical development, production and international marketing of the cars and the Mitsubishi rally conversion kits. These include, in particular, the new Gr. R4 version of the Lancer Evolution, whose type approval is imminent (the first stage of the approval procedure begins on 1st March, the second on 1st April).

The Gr. R4 version will be made for both the latest Lancer Evolution (Evo X) – with the help of John Easton’s company, MML – and the previous version, the Evo IX. The new Lancer R4 will benefit from the long–awaited lifting of certain technical restrictions, which will allow a drastic reduction in weight and improved performance. These new features will bring it closer to the Super 2000, even on terrains more favourable to the latter, as already seen at the debut of the prototype driven by Armindo Araujo at the last Monza Rally.

The task given by Mitsubishi Motors to Ralliart Italy is the tangible recognition of the effort and results of the Italian factory during its twenty years of business, working for the promotion and development of the Mitsubishi brand in the competition arena. It is also a particular acknowledgment of the two world championship Production Car titles won in the last two seasons. Ralliart Italy aims to keep hold of these laurels in 2011, deploying an array of three Lancer Evolution Gr.N in the P-WRC. Built and managed in the Tavernerio facilities, the cars will be entrusted to Polish driver Mical Kosciuszko, Peruvian Nicolas Fuchs, and Mexican Ricardo Trivino.