Moh is excited to announce that his motor racing career is about to take him to Europe, as he is entered to race in the GT4 South European Series Round 5, alongside teammate Sarah Moore Racing, at the famous Autodromo Internacional Do Algarve circuit in Portugal during the weekend of the 26th/27th October. 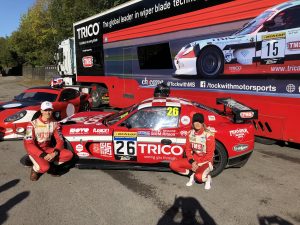 Moh and Sarah will partner in their Tockwith Motorsports GInetta G50 and continue their partnership with Trico and Chicane.

Moh’s race is the support event for the final round of the ELMS (European Le Mans Series) – 4 Hours of Portimão 2019, where Moh’s senior Tockwith teammate, Nigel Moore, is competing for the title. He and his team Inter Europol Competition are currently on 94 points in LMP3, which is joint 1st place, so the championship will be decided during the same weekend that see’s Moh make his European debut.

Then it’s back to the UK for Moh’s final round of the Britcar Endurance championship (the season finale), with Sarah, which takes place under the lights for the night races at the Brands Hatch Indy circuit between the 9th and 10th November.

The New CSCC calendar is confirmed - The Co-ordsport series, TinTops, soon back in action!