After their early departure in the previous round of the Maxxis Tyres (UK) British Drift Championship, the SATS Cosworth team were back to prove a point, and set their sights on a podium spot in round 4, at the Knockhill Racing Circuit.

A familiar track to Mark, he has always found a win at Knockhill elusive, so a good qualifying run was essential. The track is renowned for its blind first corner, which drops quite steeply. It is known to have caught quite a few drivers out, but Mark had no such issues. With some great angles, and the smallest of errors, Mark was the third highest qualifier of the day. 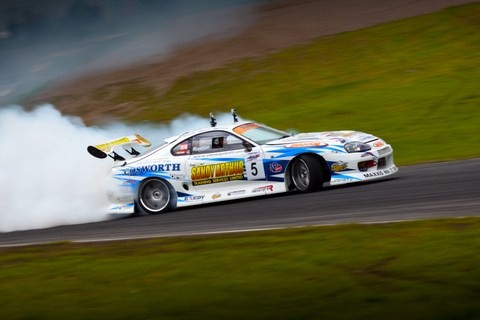 In the top 16, he faced Alan Green from Team Falken. In what should have been an exciting battle, Green handed the advantage to Mark when he veered off the track at the first corner. Unaware, Mark powered on to complete his run. This meant Mark took it easy around the track in his second run, but still put on a great spectacle for the crowds, and the judges.

In the top 8, Mark faced Ashley Stephens and easily progressed through to the next stage, after piling the pressure on his opponent, alongside yet again some great driving.

Onto the semi-final, and Marks opponent was Shane Lynch from Japspeed, who has proved in the past to be a tough competitor, but on this occasion he just couldn’t match Luneys flair, as he used all of the power under his bonnet to pull a huge gap.

In the final, Mark once again found himself up against Matt Carter from Team Falken. He gave it his all, but there was nothing he could do as his power steering gave way and he spun out. Not just on his first run, but his second too.

So Mark takes 2nd place, and gets some much needed points to stay in championship contention.

Afterwards, Luney talked about his day,

“2nd place is good for the team. The car was faultless until the last runs, when he had the issue with the power steering.”

On the next round, he had this to say,

“Silverstone is probably going to be one of the biggest, toughest rounds of the year. We’re going to do a few special tricks to the car, as well as repair the power steering, and if we get as good a result at Silverstone as we did here we’ll be delighted.”

So with two weeks until round 5, the championship is still for the taking, and the team will be working hard to make sure that the car is ready for the challenge that lies ahead. 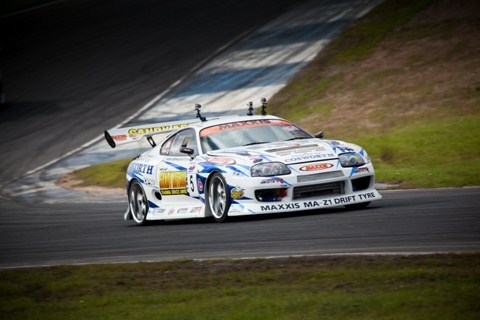