Due to a rolling accident in the old car, they had to build a new one and for this Co-ordsport decided to supply some parts. The new car has a 1.4 Zetec and a Quaife LSD. Due to changes in the rules they ran at the front of the field, this is good for the smother stages; however the first loop of the 4 stagers will be trickier as there will be only 5 cars ahead.

Stage one was a staggering 9 miles, which was slippery as the car slid along on the loose gravel and due to how the previous car rolled they were much more careful. Even though they were being mindful the new altered car was able to drive better and faster uphill.

Then the second and third stage which was around 8 miles in total, in which the grip on the tarmac varied so much, it was difficult judging how to lay it. They decided to push these two stages as the new car was working very well although they pushed a hairpin turn a little too much, costing a few seconds. Stage four was a short but fast one, with wide open roads and flowing cambered corner.

The second loop of stages were extremely similar to the first four but due to the amount of cars that had already passed through the track, it had been cleared of any loose gravel. Stage 5 had cleaned well, and they decided to attack this one, the new Mintex brake pads were brilliant, no brake fade and they gave predictable braking. They did wonderfully and even set a time 45 seconds faster than our first run! Sadly, the rest of the stages hadn’t cleaned as we were hoping, they were still slippery and held our charge back. They got through the last three stages, gaining confidence and going faster than the run before.

Overall it was a good event, they finished out first gravel rally in 3 years, the car survived with no damage. The team finished 93rd overall, 10th 1400 car home and we gained a place over the afternoons stages and finished 4th in class. The 3 cars ahead of them weren’t registered for the championship so they took maximum points in the class, which puts us 3rd overall!

“Our next event is the Woodpecker Rally on the 31st of August, based out of Ludlow which makes it our closest event to home. Five classic stages in Haye Park and Radnor, we are going to try and get a good result on stages we enjoy and consolidate our championship position. ” 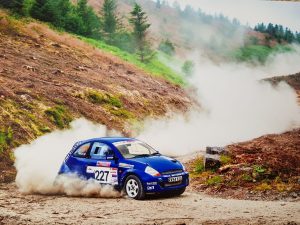 Part-Box are proud to be support Walk Motorsport