ABP have retained thier crown for a 4th year as CAT Magazine National Garage of the Year 2013! 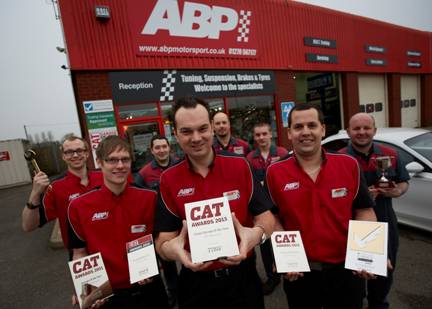 In the motor industry, this is the big one. Entries come from all over the country so getting through to the final six for the fourth consecutive year was an accolade in itself. ABP were thrilled to win the CAT award once, let alone four times! It’s a staggering achievement and an incredible start to 2013. Winning this Award for a fourth consecutive year is unprecedented and we want to say a massive thank-you to all our customers & suppliers who took the time to vote for us. We don’t have the exact figure but we understand it ran into the thousands, so we couldn’t be more thrilled. All we need to do now is carry on giving our customers the 1st class service that they have come to expect and try and win again next year!

ABP received thier award at a presentation ceremony held at Twickenham stadium, the home of English rugby in London which was attended by over 250 motor industry professionals. Likened to the independent motor trade version of the Oscars this is a nationally recognised award in the motor trade that comes with a highly prestigious title and is a massive achievement for ABP Motorsport and all of our hard working staff.

Their nomination came in recognition of our efforts in striving to achieve unparalleled levels of customer service in the garage industry along with our excellent results in the East Cheshire Trading Standards Golden Spanner scheme mystery shops scoring the schemes first ever perfect 100% score and our national Motor Industry Code of Practice customer feedback scores currently at 100% http://www.motorcodes.co.uk/garagefinder/abp-motorsport-4764.html“>http://www.motorcodes.co.uk/garagefinder/abp-motorsport-4764.html

This is the latest in what has been a busy time for ABP Motorsport recently including:

Once again, thank you for your time in reading this news article and helping ABP Motorsport to win CAT  Magazine’s 2013 Garage of the Year award.